Dr. Frederick Baker passed on August 24, 2020. I was very sad to learn about his very, very untimely departure. He left a deep impression in me during the short time in which his life touched mine. In Brussels, we conversed about technology and the future of society. I think Dr. Baker was the right man to lead us into the future and shape future society: he showed a deep understanding of the technological means, and great humanity. He was the embodiment of anything "human-centered" you may think of. He knew. He understood. What a loss. Thank you Dr. Baker, I will forever cherish the time I spent listening to you.

Dr. Frederick Baker is a man of many talents. Austrian-British filmmaker and media scholar, Dr. Baker is Research Associate at the Centre for Film Studies at Cambridge University. But he is also the author of the Virtual Reality Experience "Klimit's Magic Garden", created on the centenary of the death of Gustav Klimt (1862–1918). The work is part of the MAK's permanent collection of contemporary art in Vienna (Museum of Applied Arts). That's where I first encountered it, in early 2018. I decided to get in touch with Dr. Baker, because there was something unique to his work although I couldn't put my finger on it: I wanted to aks him about his artistic and intellectual intention, the vision behind the Magic Garden.
Lucky for me, the installation was touring Europe and in September 2018 it landed in Brussels. It only seemed appropriate as the piece was inspired by the series of three mosaics that the master of Austrian Art Nouveau designed for the famous Stoclet Palace in Brussels. I interviewed Dr. Baker right before the opening ceremony of the exhibition at BOZAR in Brussels. It was a delightful hour we spent together, and I was more than slightly intimidated by Dr. Baker's education and his clear, meditated and intelligent ideas about art, VR, today's and audience.

Klimt's Magic Garden is a tour in a virtual world entirely composed of elements that come from Klimt's works: the flowers, the coulds, the waterfall... if you're a Klimit fan (and who isn't) you will simply love the experience. It's pure beauty all around. And much more! Unlike a video game (a very common VR application), the exploration of the Magic Garden does not have a goal, there are no tasks to be completed, no obgliations: just look around and enjoy. Hence "slow VR", a concept that refers to "slow food" and the experience of taking the time to savour every momoent of the experience, and make it about quality over quantity. The figure of a woman, also taken from Klimt's repertoire, gently guides the use through the garden, but it's up to you to follow her or not. The sounds and music, the progression of the elements until the final "gate" that opens in front of the use before the experience comes to an end, is beautifullly designed, and never banal: Dr. Baker reported, and I can confirm for trying the experience twice (in Vienna and in Brussels), that users see new details in every new "visit", small things that weren't noticed before.

So is VR the next big thing? Will it kill cinema or make it obsolete? Is VR potentially dangerous for young kids? Dr. Baker is the perfect person to ask these questions. Hear what he has to say on "slow VR", the limitations of today's technology, "art in terms of technology" and making a wise use of the "wow effect". 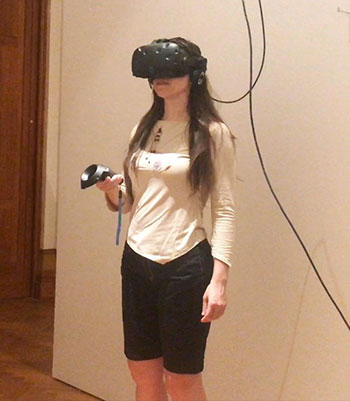 The exhibition of Klimit's Magic Garden in Brussels has received the support of the Chancellery of the Prime Minister, Belgian Federal Public Service, Foreign Affairs, Foreign trade & Development Cooperation - Austrian Federal Chancellery, Directorate of Arts and Culture, in the framework of: The European Year of Cultural Heritage 2018 & the Austrian Presidency of the Council of the European Union.