Digitality and its consequences 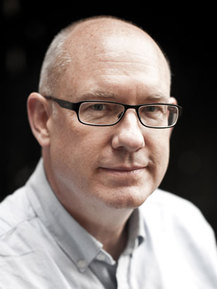 Robin Boast is the Professor of Information Science and Culture at the Department of Media Studies, University of Amsterdam, the Netherlands. Previously, he was the Deputy Director and Curator for World Archaeology at the Museum of Archaeology and Anthropology at the University of Cambridge. He has published widely in the field of information and the culture of the digital.

In particular, relevant to this podcast, he is the author of "The Machine in the Ghost: Digitality and its Consequences" (Reaktion Books, 2017). Everything has its consequences, including digitality. But what are they? Are they positive or negative? And what is digitality in the first place? I asked Robin during one of the best conversations I've had making this podcast and also outside the podcast: I feel lucky that my path crossed that of this fine scholar and delightful man. And I have to thank Dr. Frederick Baker for this, a guest on this podcast (episode #12)! I hope you enjoy this episode!

We live in a digital age, within a digital economy, continuously engaged with digital media. Digital encoding lies at the heart of our contemporary mobile-obsessed, information-heavy, media-saturated world, but it is usually regarded – if it is thought of at all – as something inaccessible, virtual or ephemeral, hidden deep within the workings of our computers, tablets and smartphones. It is surprising that, despite the profusion of books on the history of computers and computing, little has been written about what makes them possible.
Robin's book "The Machine in the Ghost: Digitality and its Consequences" navigates the history of digitality, from the earliest use of digital encoding in a French telegraph invented in 1874, to the first electronic computers; the earliest uses within graphics and infor­mation systems in the 1950s; our interactions with computers through punch cards and program­ming languages; and the rise of digital media in the 1970s. [Paragraph adapted from: http://www.reaktionbooks.co.uk/display.asp?ISB=9781780237398]

This episode was re-published on EuroScientist in November 2019 (see episode on EuroScientist). On that occasion, I visited Robin in Amsterdam again and interviewed him for another half hour! A list of highlights is available in the description of the video on YouTube and below on this page.

At minute 3:45: Files and folders were information technology that was invented at the beginning of the 20th century.

At minute 4:51: Steve Jobs and IBM are mentioned.

At minute 5:16: The digital workspace with files and folders have changed us all into being secretaries.

At minute 8:00: A physical folder and a folder on your computer are the "same" because they were "made to be the same," but behind all these layers, the medium is fundamentally different.

At minute 8:32: It "took work" to make the physical folder and the digital folder "seem very similar."

At minute 10:46: Doug Engelbart is mentioned.

At minute 11:25: The flexibility of digitality was intentionally "locked down", so that it would to be "narrowly mediated."

At minute 13:47: It takes a lot of work to make a digital text look like paper. Current designs "keep us from using text as though it was digital." About Adobe PDF.

At minute 14:04: It takes a lot of effort for the computer not to be digital, to be just like paper.

At minute 19:38: The current design of digital devices is the consequence of an economic situation, it has nothing to do with digitality and its potential.

At minute 19:58: You don't get a lot of choice because you get what they decide is valuable for them to sell.

At minute 20:25: The lack of choice we have comes out of an economic system, it has nothing to do with digitality.

At minute 21:19: MIT and the first computer graphics (and video game) are mentioned.

At minute 23:31: Xerox PARC and Alan Kay are mentioned.

At minute 25:00: Logoscript: an implementation of Logo (programming language) in JavaScript.

At minute 25:28: Steve "Woz" Wozniak and the Lisa computer are mentioned.

At minute 26:02: IBM and Microsoft, "a small startup from Seattle," are mentioned.

At minute 27:17: A lot of what we wind up with now is a consequence of those "technological commitments" that were made in the 1970s and early 1980s.

At minute 28:00: With mobile devices, with smartphones, computing is shifting... we're moving away from a "typewriter with a screen," which is the model that has been dominating since the late 1940s.

At minute 29:45: Why the new business models demand that we forget [previous ways of doing things, possibilities that were not considered valuable for the business?]

At minute 30:38: Should we build our own machines? #breakTheMould

At minute 31:54: The digital revolution hasn't even begun and will not begin until we all program (paraphrasing Alan Kay.)