Steven Laureys is a neuroscientist who studies the states of consciousness in patients in a coma. His work is much more diverse and complex than this, but in a nutshell this short summary should already raise your interest. Who isn't fascinated by the mysterious feeling of "being there", what makes us conscious? Steven Laureays leads the Coma Science Group at the GIGA Consciouness Centre of the University of Liège in Belgium. He is the author of several publications on consciousness, awareness, coma and the recovery of neurological disability, and the recipient of honours and award for his scientific and communication activities.

I was attracted to Steven Laureys' work because it's the quintessence of state-of-the-art technology applied to the investigation of an elusive yet universal phenomenon like consciousness, something that is not unique to human beings but that defines us in a particular definition of consciousness. Because animals are aware of the environment too, they are responsive and they feel emotions in their own way, but we are the only "animal" who interrogates itself about the "being there" and who developed the technology to do so in a scientific way.

I approached Steven Laureys as a neophyte in the neurosciences, asking questions that probably everyone would like to ask if given the chance, including "what is consciousness"? Now this is a philosophical question in a way, but science is narrowing the area of the "unknowable" and it is interesting to hear what definition of consciousness neuroscientists have. It was an incredible hour I spent talking with Steven Laureys in his office in Liège, and, for the record, the first interview I recorded in chronological order for this podcast. I was indeed very nervous! Still, it was hard to bring the conversation to a close: there are so many interesting topics to discuss, such as the fundamental concept of "redefining death", in terms of brain activity and not of heart beat. We take so much of today's medicine for granted, but some of it is very recent! The possibility to apply "therapeutic obstinacy", with all its ethical implications, is only allowed by the ever more sophisticated ways to keep someone alive, in a vegetative state. At the same time, being able to detect pain in patients that can't express pain vocally or elseway, allows us to take better care of them. 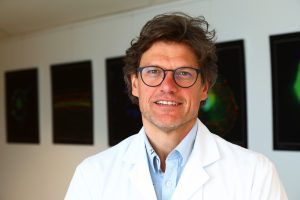 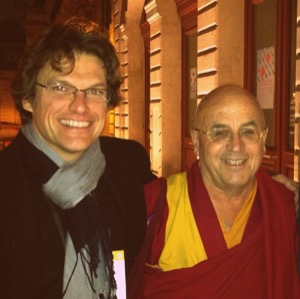 This seems to me one of the most fascinating fields of research: science can now measure and reformulate problems that historically have only been prerogative of religion or philosphy. Near death experiences, for example: are they a scientific problem, or simply fantastic stories reported by people with a vivid imagination? What I loved about Steven Laureys' approach is that he combines an impeccable scientific method with an open mind attitude, avoiding dogmatism - which is precisely how science should advance, "being critical about your own criticism". Critics say that altered states of mind cannot be studied: Steven Laureys suggests that we do, "trying to confront what you think you understand with what you think you measure."
If you've had a near death experience, or know someone who has, please get in touch with Steven Laureys' research team at: coma@uliege.be.

I have learnt a great deal from Steven Laureys, and one of my favourite quotes from this interview is: "The Dalai Lama is a good scientist"! Yes, Steven Laureys has met the Dalai Lama as well as other Buddhist monks, and has involved them in his experiments on consciousness and the effects of meditation on the mind. I hope this podcast episode will have positive effects on your mind!

This episode was re-published on EuroScientist in April 2020 (see episode on EuroScientist). On that occasion, I met Steven again in his office in Li&egravege and he showed me some brain-computer interfaces including one that he wore running the New York marathon in 2019.

00:34 Where does the state-of-the-art technology that neuroscientists use today come from? Who designs it, who produces it?

00:43 What made Galileo such a good scientist is that he had good telescopes.

3:05 What is the main difference between a fully functioning brain and a damaged brain? What stands out in the observation of these brains?

4:42 Why are small wearable devices relevant to Steven Laurey's work, as opposed to large and expensive equipment found at the university hospital where he and his team work?

6:31 Steven talks about wearable devices for self-monitoring purposes, and gives some examples.

6:50 Steven ran the New York marathon in 2019, wearing a device that monitored his brain activity throuout the performance.

8:33 The ability to stimulate the brain and influence its activity may open up new application scenarios besides rehabilitation, including leisure, enhanced creativity, super-consciousness, etc. I ask Steven what he thinks about it.

9:35 Following up on the previous point, about applications that are not medical rehabilitation, Steven acknowledges that brain-computer interface technology can be used for less than good purposes, but he also says that this is the case for all of science - for example, radioactivity.

14:03 How is Europe doing in comparison with the rest of the world in terms of ethics regulations and the relative administrative burden on the research?

15:50 "I would like to see more science in the media" says Steven Laureys.

16:28 The balance we need to strike between doing difficult research and protecting the citizens is an open discussion that we need to keep having: technology advances and allows us to do new things, and as a consequence policy regulations must follow.

Companies and startups mentioned in the interview